Thor (a.k.a. Odinson) has been a part of the Marvel Universe since Journey Into Mystery in the 1960's. Being a founding member of the Avengers has made Thor and his mighty hammer Mjolnir and iconic partnership. He also has one of the most extensive backstories that spans centuries due to his affiliation with Norse Mythology.

His character saw a resurgence in the 1980’s during Walter Simonson’s run as writer and artist. Simonson revitalized the character and brought us iconic characters such as Beta Ray Bill and Throg. Thor saw a Rebirth in the 2000’s followed by a spike in popularity with Jason Aaron’s run on The God of Thunder.

Here’s a list of the Top Thor Stories ranked by popularity, backstory, and storytelling. 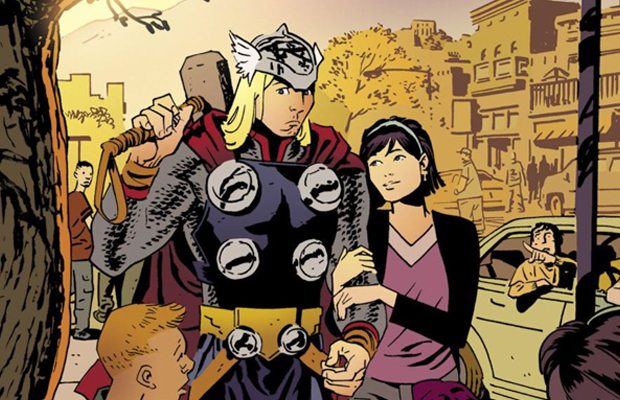 First on the list is a fun series packed with epic, over-the-top enemies for the God of Thunder. Thor battles ginormous city-sized robots, the dragon known as Fin Fang Foom, and Namor the Sub-Mariner. He also fights alongside Iron Man and was sent back in time to the era of Camelot with a young Captain America. For Ages Thor has been holding the line against dark forces to prevent Ranarok. During this time, there’s been a never-ending cycle of rebellion between Thor and his father, Odin. In the end, the selfish and spoiled Thor must face the wrath of the All-Father. This fun story has stuck with Thor fans for years. Loki, being the trickster that he is, curses Thor into a frog. Thus, Throg: Frog of Thunder was born! It’s a great story with a fun title “Thor Croaks” during Simonson’s era. He even reappears a few times including the 2016 Secret Wars.

Whom the Gods Would Destroy In the Silver Age, Thor fought another demi-god: Hercules. Under most circumstances, Thor would have easily bested Hercules. However, Odin punished Thor for revealing his secret identity to Jane Foster and he loses most his powers. The “Original Sin” crossover left Thor Odison unworthy to wield his beloved hammer. Unable to lift it, Mjolnir is left on the moon. Both heroes and villains attempt to take the hammer but to no avail. Until a mysterious woman is able to lift it and becomes Thor: Goddess of Thunder.

Naturally, the original Thor (now known as “Odison”) is quite angry. He’s desperate to see it returned to his hands. It’s Thor vs. Thor in the battle of the hammer. Unfortunately for Odinson, the choice may not be up to him.

This story has been out for a while now. Even if you know who the Goddess of Thunder is, it’s worth the read. Jason Aaron does a great job introducing a new Thor while keeping Odinson relevant and part of the story. Jason Aaron begins his Thor run by introducing a new frightening villain Gorr the God Butcher. In this murder-mystery/time-hopping escapade there are three versions of Thor: the young and cocky adventurer, the Avenger that we know and love, and the old All-Father that is nearly identical to Odin. Each of them are sympathetic in their own right.

In this single-issue story, Thor and a group of Asgardian “heroes” venture into Hel to rescue a few souls of Midgard. Skurge the Executioner, a C-List villain at best, ends up making a final, epic stand that will be sung in the halls of Valhalla. Throughout history Asgard has been faced with a perpetuating cycle of Ragnarok predictions and their attempt to prevent it. This time Thor seeks to cease the cycle and stop the end of the world. However, things don’t always go as planned. Towards the end of Simonson’s tenure, he wrote and illustrated a series of incredible splash pages for the Midgard Serpent issue. Thor has been cursed by Hel, giving him a brittle bone structure. He now has the job of defeating a gigantic beast in his weakened condition. In this fan favorite by Stan Lee and Jack Kirby, Thor is faced with the insurmountable task. The God of Thunder must batte the mighty Mangog, a being that is powered by the hatred of billions of beings that were killed by Odin. Despite his best efforts, Thor is only able to hold the being to a stalemate. The fate of the universe will hang in the balance until Mangog is subdued.

The Ballad of Beta Ray Bill Walt Simonson starts off his run with several firsts. The first appearance of a new race the Korbinite. Also, the first appearance of a new, iconic character: Beta Ray Bill. As well as the first time a non-Asgardian that is capable of wielding the sacred Mjolnir.
The introduction of Beta Ray Bill will forever alter the Thor mythos and the Marvel Universe. Following the events of Civil War and his three-year absence, Thor returns with thunderous applause. He brings the Avengers back together after their notorious falling out. This is the first resurgence in Thor since Simonson’s tenure. Surtur, a fire demon from the Muspelheim realm, comes to Midgard (Earth) in search of the Biforst to gain access to Asgard. Odin, Thor, and Loki must band together to stop Surtur and to save the fate of the universe.
This climatic story had been building over the course of Simonson’s run. During his tenure, there were continual hints at the fire demon and his impending doom. Surtur will make his first appearance in the Marvel Cinematic Universe during Thor: Ragnorak.